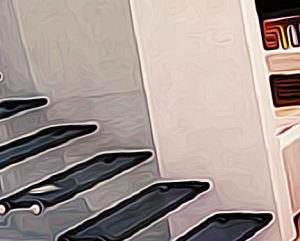 ‘How long are your parents out of town?’ James called up the stairs, anxiously looking around like they were going to come back at any moment.

‘Would you relax?’ Pete rolled his eyes, leisurely strolling down the stairs. ‘A week, at least.’

‘What do you mean “at least”?’ James asked, eyes wide. ‘You don’t know exactly?’

‘It was more of a “take me to Paris or I’ll divorce you” kinda trip than a neatly planned holiday,’ Pete shrugged. ‘But it’s not the first one, so there’s precedent for at least a week.’

He pulled a bottle of whiskey out from underneath his arm and James momentarily forgot how terrified he was of Pete’s father.

Pete rolled his eyes again. He took a step back, onto the landing of the staircase. ‘You see those,’ he sighed.

‘Yeah, the glass. Last time my dad went on a business trip to Japan, mum had some place near Melbourne that specialises in glass balustrades come in and replace them. He never even noticed.’

‘Well, I mean, glass can be difficult to—’

‘They used to be wood, James.’

‘Relax!’ Pete laughed, clapping his friend on the back. ‘We’re supposed to be having a party!’

James grinned, despite himself, starting to loosen up. Pete shook the bottle celebratorily and marched towards the kitchen.

‘It’s amazing work by the way,’ James called out to him, not moving.

‘What’s that now?’ Pete asked, twisting back around.

‘The balustrade — you don’t see quality residential glazing work like that every day.’

‘James, what are you talking about?’

He stretched out a finger to touch it and Pete’s blood ran cold. The world slowed around him as he dropped the whiskey bottle, shattering on the ground as he flung himself down the hallway and tackled James into the tile.

‘If you get a smudge on that glass,’ Pete whispered, terrified, ‘my mum will hate me.’