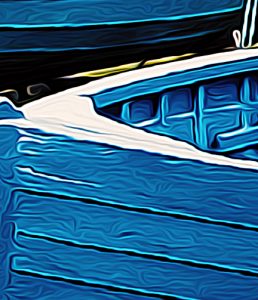 The designer man listened as I spoke about all my favourite things to do with the ocean. We talked about the pull of the waves and the sound they made as I drifted off to sleep each night. We talked about how much I loved the curve of anchors and how I often drew them on my own paper when I had downtime on the ship. We even talked about whales, and all of the magnificent whales I had seen on my travels. I decided that the designer man was right, and it would be nice to include all of my favourite things in my boat side decal.

Although it wouldn’t be as intimidating as my face to other boats, it would still be a representation of me. If we designed it just right, it would signal to passersby that I knew the ocean better than them – better than anybody – and I was not to be messed with. I watched as the designer man sketched out a picture of my ship according to my specifications, and then began inking the design in the space where the hull was. It was fascinating watching his expert hand move across the paper. He was almost as talented at design as I was at thieving from rich people. It was so strange that he didn’t know I was a pirate, yet he was still able to capture my personality so well in his drawings. Because he had so much experience with fishing boat graphics, he understood how to properly draw fish and waves without using a reference.

Although I mostly let him do his thing, I occasionally guided him to place a particular symbol where I wanted it. For example, I really wanted the anchor to be the main feature of my design to show how I connected to the sea. That way, maybe when I became the most feared pirate on the ocean I could print out business cards with an anchor logo.