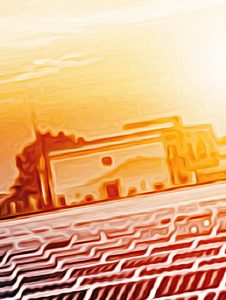 “Vai, what are you doing?” Maphira asked, not particularly enjoying the feeling of a blaster pressed against the back of her head.

Her partner spat on the floor of the solar power facility’s battery room. “We’ve worked too hard to let this all come undone now. Captain Hold thought that by seeing the work of the Conclave, you’d come around to our cause, but evidently, he was wrong.”

“Vai, just put the blaster down,” said Rylee, standing ready to push the button that would destroy a major Conclave base. “I can’t say I’m too surprised. I always did have a strange feeling about you when I was in the force.”

Vai laughed, short and bitter. “Oh, it’s not just me, you idiot. Not just Captain Hold, either. The entire precinct has come around to our mission. Our utopia of a machine society is almost within reach. By the end of the year, everybody will have solar PPAs, and when everybody has access to solar power, the Uprising will begin. Step away from the console or your sister gets it. I know you still care about each other.”

Rylee looked at Maphira with wide eyes. It was true; as much as they annoyed each other, they were still sisters. Maphira gave the slightest nod, hoping her sister would understand what she wanted.

A society where anybody could access a business offering solar product solutions sounded perfect, but not if machines ruled the entire world. She wouldn’t let it happen. Maphira didn’t know why Rylee had targeted the base in Hobart, but it was clearly for a good reason.

Taking the hint, Rylee slammed her hand into the button. The bluff failing, Vai stood shocked for a moment, and it was enough for Maphira to dodge out of the way, spin and knock her former partner down.

Red lights flashed. Warning sirens sounded. The facility shook, and the room began to collapse. Debris separated the sisters, as it became clear that they needed to flee.