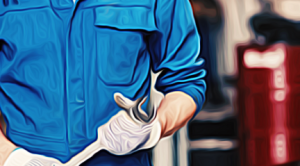 Rylee had never been in so much pain. Perhaps she should have seen it coming—of course, the blast from the device she threw on that limo would affect her while driving the motorcycle. Of course, she would be so surprised that as she wrestled for control she lost it completely and ended up with her leg crushed beneath the wreckage. Of course Cosmo the Kobold would survive the attack and run away.

She had to get up – and fast – or risk losing Cosmo entirely. It was clear now that they had been heading to a mechanic in Tasmania, although it wasn’t obvious which one. If she wanted any chance of following him, she’d have to get up before losing sight of the runaway kobold completely.

As she grunted and shoved the broken motorcycle, a flood of pain bursting into her leg, Rylee considered the possibilities. Her boss had briefed her on which auto shops in Tasmania were likely bases for the Conclave of Mechanists. Hobart was the most likely location, but there were multiple car mechanics there who could be part of their plans. Perhaps the mechanic offering service around Brighton would be Cosmo the Kobold’s target.

“Move dammit,” Rylee said as she shoved again, sweat dripping down her forehead, into her eyes. “Come on, there’s no time for this.”

The mangled metal screeched as she pushed it along the asphalt. Finally, she created enough space to yank her leg free.

Well, at least it’s not broken, she thought, flexing it. Now I’ve just got to make sure that kobold is actually heading to the Brighton car service—not the Cambridge one.

With that thought driving her to push through the pain, she stood, hobbling as she found her footing. Each step came easier than the last, and eventually, she found the strength to shake it off and break into a run. The kobold was getting away, but she wouldn’t lose him.

Far too much was at stake for that.